Master C.H.E.K Practitioner level 4 The Transcendency of Drumming and healing 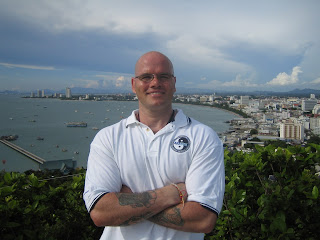 I have been passionate about health and fitness for 24 years. I started working out at age 13 and became a personal trainer in 2000 - I love it and have truly found my passion. In 2003 I went to see paul Chek teach medicine ball training and it blew me away. shortly after, I listened to You are What You Eat and I was blown away again. I could see that paul was 20 years ahead of his time in creating a system that teaches us how to heal our clients and ourselves. Now six years on I’m a Master C.H.E.K practitioner level 4 – it’s been a long road but I loved it all way.
Becoming a Master C.H.E.K practitioner has been my dream. Never give up on yours!
Thesis - The Transcendency of Drumming
I consider myself to be a modern, yet spiritual man. I feel the connection between the earth and myself through my Chakras and have not felt closer to my spirit self and the earth as when I drum. The vibrations I feel from the drum are, to my clients, and me so much more tangible than the spiritual vibrations of my imagination. I can actually feel and recognise shifts in my Chakra, and increase my own proprioception through the act of drumming and meditating (allowing us to ask and answer internal questions) by using the drum
to give you an idea about what I do and what I wrote about, here is a summary of one case study from my thesis.
Sharon, 50 years of age - Myalgic Encephalomyelitis
In my initial assessment I found that sharon had no energy, was stressed out and had no money. Her father had died and she is now looking after her mother in a full time capacity. I used a tap, tone, tune assessment to look at her first Chakra

she presented with financial insecurity, tribal ties through family and an inability to achieve her goals indicating a weak 1st Chakra.
The 2nd Chakra was strong, indicating strong sexual energy but low fluid balance.
The 3rd Chakra indicated that she was weak in her power and self-will because her diaphragm had shut down; she found it hard to achieve her dreams.
The 4th Chakra was closed down because of a split with a lover after 12 years, as the 4th Chakra is all about giving and receiving love. she also found it hard to internalise compliments regarding love.
The 5th Chakra showed that she is a strong communicator but verbalising her self-will is weak.
The 6th Chakra was strong in universal intelligence and strong in creating and developing new ideas. However, it was weak on emotional intelligence.
The 7th Chakra was transcendent, indicating a strong bond with her higher self, but her dogmatic belief system seemed to be blocking her.
I also found she had weakness with her breathing, winging scapulae, hyper- extended abdominal wall, fungus on the tongue (indicating the likelihood of fungal and or parasite infection).
Due to her financial difficulties she could not afford to let me use the full C.H.E.K system to heal her, so I chose to use drumming as an effective and affordable alternative, especially as she seemed receptive to the technique and had even received sound healing before from another practitioner (although not a C.H.E.K practitioner).
I started by getting her to lie on the Massage table, then to take 10 deep diaphragmatic breaths (as best she could) and just relax. I felt her energy using my intuition and discerned the areas of blockage that needed attention. I found that she was quite Yang with her energy (leading from her current situations). so I put coloured silk, representing each individual Chakra, on the energy centres and then placed Chakra crystals on top of those. I cleansed the crystals the night before using smudging and a tibetan bowl. I began the healing session by using a Native american Rattle up and down her body 7 times per Chakra. Then I went around the body 7 times in a clockwise direction with the same Rattle.
My intuition then led me to move on to the Drum, I played it with a slow, quiet rhythm progressing upwards to a fast, loud rhythm following my clients responses and her increasing acceptance to the rhythmic changes. The next intuitive step I made was to add my vocal resonance to the drumbeat in order to balance her energy more efficiently. Then I started to transmit healing love and other positive energies. My next course of action was to smudge, starting at her

feet and blowing the smoke over the length of her body. after this I allowed her to settle as I said a 10-minute prayer.
Once I finished the prayer the next intuitive step was to use the 7th Chakra tuning fork over her body in order to reaffirm and rebalance her energy field. Once I had restarted the resonant part of the treatment I decided to continue
it with my voice (using overtoning) whilst all the time still transmitting healing love energy. after this I filled a tibetan Bowl with water and played it for approximately 5 minutes. as I finished playing the bowl I felt as though we were approaching the natural conclusion to the session, and so chose to carefully bring her back to full consciousness by counting back from ten and slowly getting her to open her eyes. she then slowly sat up where I then placed a healing crystal on top of her head and placed the top Chakra tuning fork on top of that. The end of the session came as the tuning fork’s resonance had fully dissipated. at which point I provided the client with water to make sure that she was fully hydrated.

CLIENT Feedback:
“scott, this was a unique experience. You are truly gifted. I’m not sure what you’ve done but I feel absolutely amazing... Rebalanced... Reenergised. I need to definitely come back again for more.” (Which she has!)
since the first treatment she has been able to support her life with nutritional supplements, which I recommended and she has made more positive strides in her life (including a more successful love life).
More about Scott
Based in london, uK, scott is a Master C.H.E.K practitioner level 4, CHEK HlC 3 & golf performance specialist, as well as a CMta 2, Y.M.C.a. Master personal trainer and trained Functional Diagnostic Nutritionist.
You can learn more about scott and his techniques, or make an appointment with him on the web at: http://www.activebryantsystems.com/
Or, contact him by phone at: 07841 144 878
Scott is currently offering a 20% discount to C.H.E.K/HLC Practitioners who would like to book him for a healing session and learn more about the techniques that he uses.

Posted by scott bryant at 08:40 No comments:

Promote Your Page Too

like to know what the vitamin you need to take

from fat to thin this in 12 weeks

what do you think of my blog